Situated in the Mahalangur Himalayan Subrange of the Himalayas, Mount Everest (also known as Sagarmatha in Nepal and Chomolungma in China) is the highest standing mountain peak above sea level. This mighty peak runs along the border of the Federal Republic of Nepal and China.

The current official measure height of Mount Everest is 8848 meters (29029 ft.) from sea level. This height of the mighty Everest was measured by an Indian survey in 1955 which was recognized by a Chinese survey in 1975. Since then mount Everest is recorded as the tallest mountain peak on planet earth.

Research done by a group of scientists revealed that the height of Mount Everest is increasing by 2 inches every year. Theoretically increment by 2 inches is not a big term, yet in the gap of over a million years, this increment of height is something noteworthy.

The mission to scale the world's highest peak on earth was taken into serious consideration. Accommodating the mission a team was formulated in 1847 which was led by Andrew Waugh of the Royal Surveyor General of India. This team started scaling the highest peak on the Earth and discovered Peak 15 – which is now known as Mount Everest to be the world's highest mountain peak. Before that Mt. Kanchenjunga standing at an elevation of 8582 meters was considered the highest existing peak on Earth.

Despite the Great Trigonometry Survey of Scaling Mount Everest in the 19th Century determining the height of Everest is 8840 meters there is still a debate of the given height is not the actual height. There are many people who actually believe that the elevation of Mount Everest given by the Waugh and the team is actually 29000 ft. They thought that the roundoff figure of the peak is not believable and henceforth added additional 2 meters to make it sound more authentic. That makes the height of Everest to be 29002 ft. which converts to 4840 meters.

Why was the Heigh of Everest Base Camp remeasured?

Currently standing at the Elevation of 8848 meters above sea level, Mount Everest is the world's highest mountain peak which has been widely accepted since 1956. The height of Mount Everest was first recognized by an Indian survey done in the year 1956 which was then officially recognized by Nepal and China in 1975. 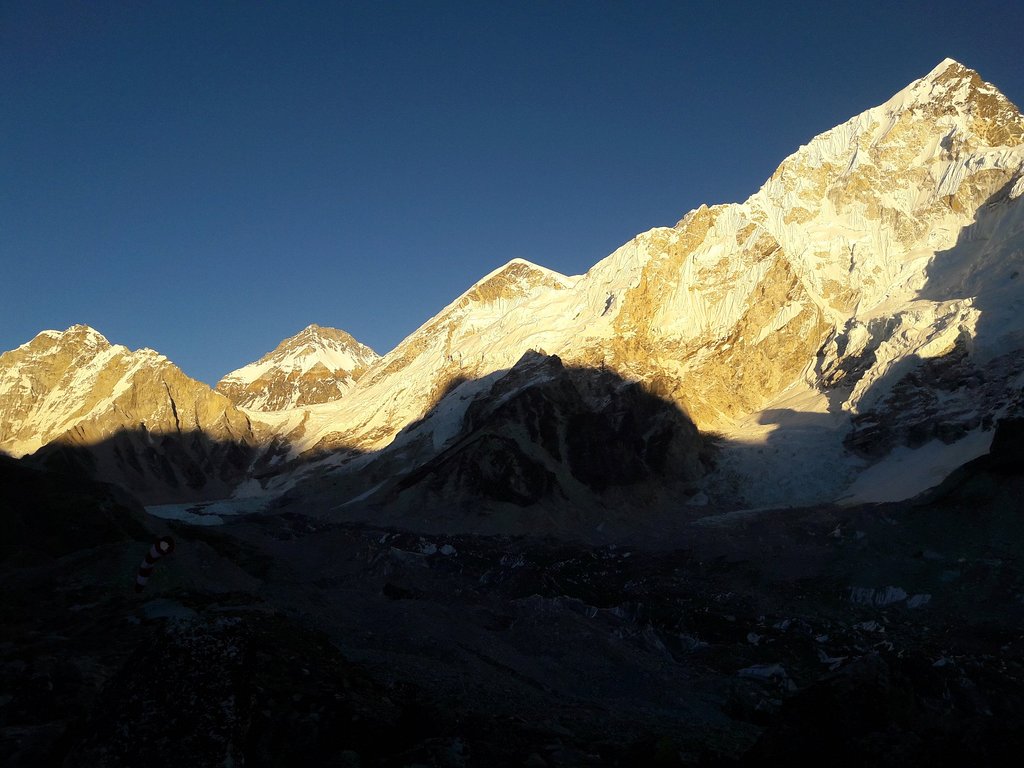 In the year 2019, when the president of China, Xi Jinping, visited Nepal, both the countries agreed on remeasuring the height of Everest which will be revealed together to the world to know.

The main purpose of Nepal and China agreed to retrace the height of Mount Everest, is because of the previous measurement which was done by Indian, American, and European surveyors. This joint effort of Nepal to retrace the Height of the World's highest peak will signify good relations and pride and also come with their own figure which both countries can agree on.

As per the agreement, Nepal has already finished measuring the height of Everest in the last year. Whereas the Chinese side commenced on the expedition of Everest in march of 2020, amid the pandemic of CORONA virus. Both Nepal and China have taken a different points of reference to sea level for the measurement. Nepal has taken a point close to the Bay of Bangel as the sea level to determine the height of the mighty Mount Everest while the Chinese side took the reference of the Yellow sea for the measurement.

The retracing of actual height after many decades will surely provide the new highest point on the Earth. Nepal has already finished its part of the work and now is waiting for the Chinese side to complete its survey. The new height of Mount Everest will be announced jointly by Nepal and China. Primarily the height of Everest is said to be released sooner however the date has been shifted back because of the COVID 19 pandemic.

How Everest height is rescaled?

Various tools and techniques are available in the modern era to make the precise scaling of the peak of Everest. But how the scaling is made affects the most. Among the various method of calculating the elevation of Mount Everest some of our; from the sea level or from the lowest depth of the sea or even from the distance from the center of the Earth. So, there has always been the confusion of determine the actual height. If you take the center as the reference point to measure the elevation then Andes Peak will be some of the heights peaks because of the spherical shape of the earth.

The first scale of mount Everest was done by the Indian surveyor in the year 1856. This great trigonometric survey to scale mount Everest published that the height of Mount Everest is exactly 29,000 feet. However, the surveyor at the time thought that the round figure of Everest is not believable and henceforth added 2 additional feet to make it sound more precise.

For the rescaling, the elevation of Mount Everest (Chomolungma) the Russian government has to provide a helping hand to install GPS equipment at the summit. The Russian government also provides the training to process the data of GPS, gravity measurement, leveling as well as geodesy.

Nepal's Survey Department sent both customary strategies (geometry leveling as done by Survey of India in the 1950s) with exact leveling and a more precise present-day geoid framework with gravity overview and Global Navigation Satellite System (GNSS) to cross-check the outcomes.

Under geometry leveling, the Survey Department chose 12 perception focuses in Solukhumbu, Khotang, Bhojpur, and Dolakha areas from which its experts estimated the position and point of the culmination. Assessors at that point utilized the Pythagorean hypothesis to determine the elevation.

The Chinese side has yet to complete their part of measuring the elevation. The Chinese surveillance team reached the top of the elevation amidst the COVID 19 pandemic. Reaching the top, they left all the required equipment and head back to begin the rescaling. The equipment left on the Top of Everest will connect with the BeiDou satellite navigation system and provide the data regarding the actual elevation of Everest. Moreover, the Chinese have also conducted a series of overflights above Mount Everest with aircraft equipped with precision gravity survey equipment.

How high is high?

The modern history of legendry Mount Everest is encircled by intrigue with respect to its real height. The Great Trigonometric survey led by the Indian Surveyor in 1856, during the system of British, uncovered the tallness of Mount Everest to be 8840 meters and the world has acknowledged it as the most elevated top on the planet. They likewise named this top after Sir George Everest, who was the head of scaling the height in 1856.

Many attempts were done to know the exact elevation of Mount Everest. In the year 1955, the Indian survey revised the height of Everest from 8840 meters to 8848 meters. This height given by the Indian survey was later reconfirmed by the Chinese in 1975. According to the Chinese survey, the height of Mount Everest is 8848.13 meters. However, in 1999 US surveyors reclaimed the height of Everest to 8850 Meters. This elevation was measured by using GPS and radar technology. 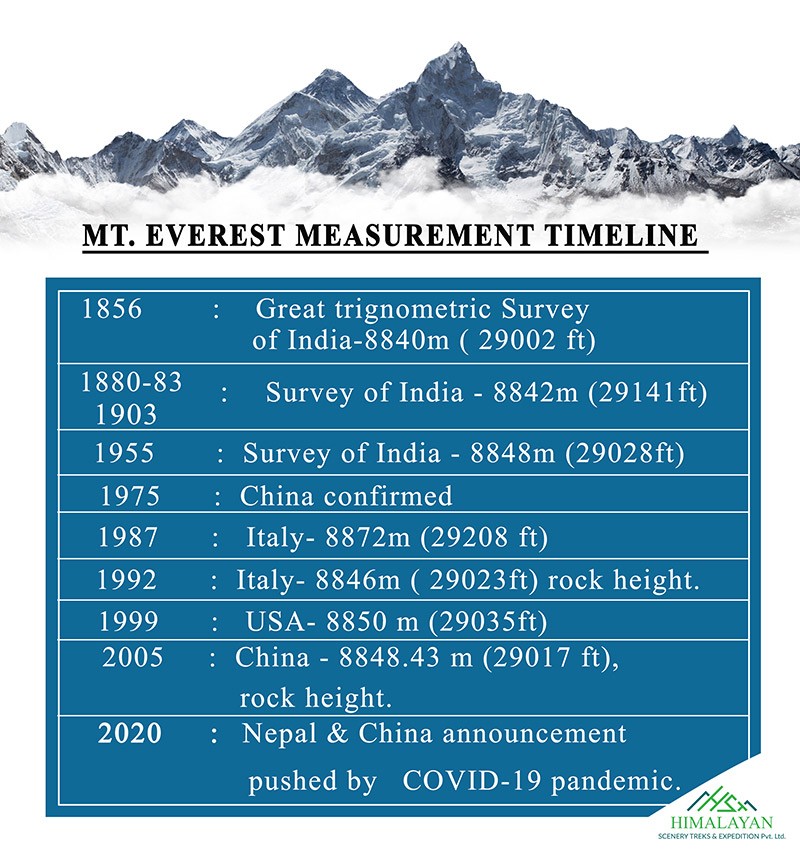 Later on, in 2005, the Chinese rescale the height of the pinnacle of Everest. From the review, it was uncovered that the tallness of Everest Rock is just 8844.43 meters which is 4 meters lower than the past estimation. As per the Chinese side, the leftover 4-meter height is the stature of the ice over the mountain top. Since then a long debate about the height of Everest is going on between Nepal and China. Later on, both the nation consented to utilize both figures for representing the height of Everest.

Although both the country consented to utilize 2 figures for Everest's rise, there has been an issue of taking the ice cap as the tallness of the summit. It is because the thickness of the ice over the highest point fluctuates year to year while the stone height is more lasting.

The new height of Mount Everest has been officially released by China and Nepal. The newly recorded elevation of the world height peak, Mount Everest is 8848.86 meters. The previous height of the mighty peak Everest was 8848 meters. Up to this point, the nations varied about whether to add the snow cap on top. The new stature is 8,848.86m (29,032 ft). China's past authentic estimation of 8,844.43m had put the mountain four meters lower than Nepal's.

Everest remains on the fringe of China and Nepal and mountain dwellers climb it from the two sides. Authorities in Nepal and a survey department said assessors from the two nations had coordinated to concede to the new height.

The consent to together report the new estimation of the Earth's most noteworthy point was made during Chinese President Xi Jinping's visit to the Nepalese capital, Kathmandu a year ago.

Mount Everest grows by nearly a meter. The newly remeasured height increment of Mount Everest is 0.86 meters making the height 8848.86 meters and is accepted by both Nepal and China.

How Hard Is It to Climb Mount Everest?

With the increment of advanced technology and gear, climbing Mount Everest has been a piece of cake. A survey to measure the success rate of the Everest Expedition concluded that the expedition of the world's highest peak has doubled in the last three decades. Despite the success rate, the death rate has remained unchanged. The average death rate of the first climber to Everest has remained 1% since 1990. A study published in PLS One clearly showed the success and death rate for first-time climbers in the period 2006 to 2019. In the last few years, the craze for conquering the peak of the Everest base camp has increased significantly. At the base camp of the mighty Mount Everest, we can see hundreds of climbers and Sherpa camping and waiting for the perfect time to conquer this mighty peak.

If you want to witness the magnificence of Everest but don’t want to take the risk of climbing then the Everest Base Camp trek will the best option for you to enjoy the bewitching beauty of the glorious peak.

Pack your bag and get on the next journey to witness the Mighty Everest standing tall behind the infinite blue sky. You can directly book the trip to the classic trek to Everest base camp or make a custom itinerary.

Himalayan Scenery Treks and Expedition is the Nepal base Tour and Travel company that has been providing trekking, tour, and adventure activities all around Nepal, Tibet, and Bhutan. For us, your safety and comfort are the highest priority. Join a journey with us, and we will make sure that you are satisfied and have a story to tell to your friends and family when you fly back to your home. 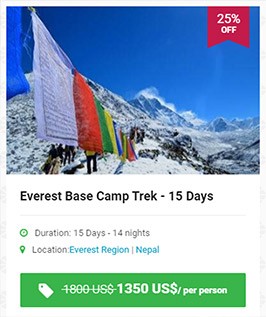 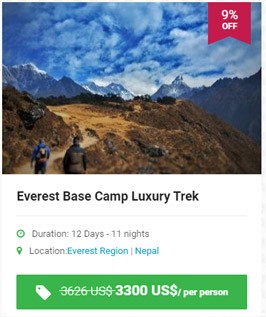 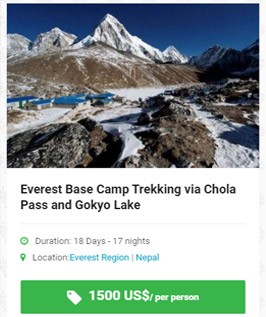 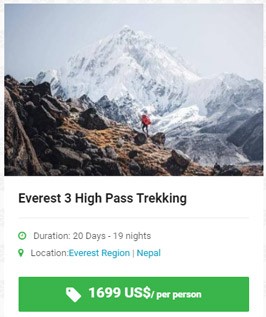 If you are planning Everest Base Camp Trekking post-COVID 19 then the following article will help you explore more of Everest Trekking without any complication and risk.