Manaslu Trek is one of the underrated trekking destinations with a lot more to explore and experience. There are just so many people who have to explore the off-beaten path to Manaslu. There’s is a reason for that. A lot of trekkers do not know about the landscape, weather, and best season to trek this underrated destination. Here we are to fill that gap and help the traveler and adventurer to explore this trail to Manaslu in the years 2019 and 2020.

Starting with the basic thing weather at higher altitudes is unpredictable and the weather here at Manaslu is as much unpredictable in other regions including Everestand Annapurna Region. But this unpredictable weather makes the trip more thrilling and adventurous. All you need to do is think smart and choose a wise decision about when to travel. You can get general ideas about the weather by reading the past days and years. It may not be exact but at least you will be well prepared for the trip.

The weather here is so interesting, it changes quickly, a cloud floating around while it is still sunny, then humidity rain, and strong winds just so strong to make you feel nature. It's such good and a magical experience you will be able to experience the various season in a single day.

The weather all depends on the time of year you plan your trip. But there is one general thing while traveling to Manaslu Circuit trek or either at the higher altitude and to be prepared for is the weather which is sunny during the day while cold during the night. The temperature drops below 0°C during the months of December to February.

Here’s just the general idea of what kind of weather you will be able to experience during various months of the year.

What is the Best Time to Trek Manaslu

Manaslu Trek in Spring Season (March to May) 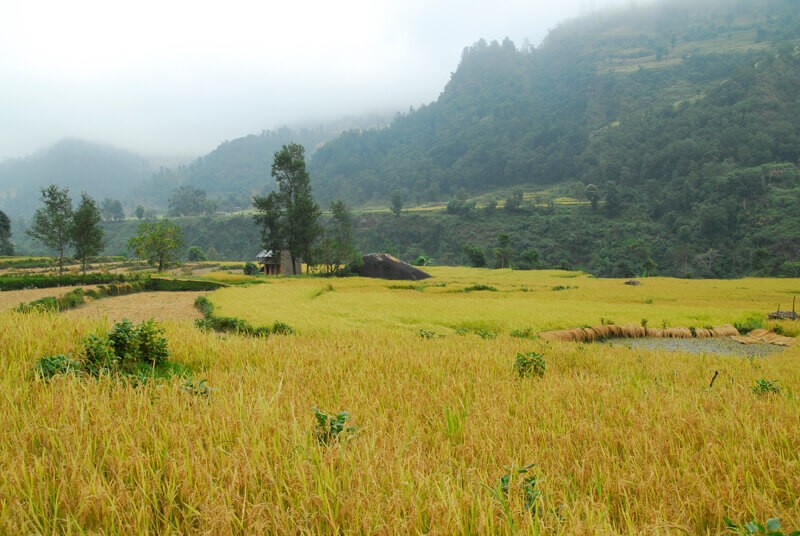 Spring Season, generally known for new beginnings, freshly bloomed bud, chilly weather and nature feels fresh and smells good. The weather starts with a chill temperature and it gets warmer by the end. Most people like this season for the trek. The mountain's views are great nature itself is fresh, the trails are all good and the weather is chill. If you are to travel in this season you will be able to experience everything at its best.

Now all you need to know is which is best among the months that fall in the spring season. Here’s what the weather is like during various months of the Spring Season.

March is the best month if you want to travel in Chill weather to Manaslu Circuit Trek. The weather is not very hot at a lower altitude and not very cold at a higher altitude. The views of the mountains are great, and the trail is so good. You can experience nature at its freshest moment. Just blooming buds of flowers and the green pigments on the leaf of trees make everything around you look green and beautiful.

Around this month people start reopening their lodges and the business starts to kick off. As the climate is also cool you can experience your trek to the utmost thrill and adventure.

If you are more into flowers and greenery with chill weather and beautiful views of mountains and uncovered off-beaten trails, then April is the best month for you to trek the Manaslu Circuit Trek. There are lots of different colorful flowers on the way. You will feel more like being in heaven. Nature is at its utmost glory with colorful blooming flowers and the great view of mountain vistas.

If you are the one who wants all the colorful flowers and great sceneries of the green landscape while exposing more of your skin to the sun, then May is the best month to plan your trip to Manaslu Circuit trek. This month indicates the end of the spring season, but the views and nature are pretty good and offers great views of the mountain it is only the weather at lower altitude are warmer rather than chill and at a higher altitude, the weather is very good. It’s the best time to plan your trip to the destination which is elevated at a higher altitude such as Everest Base Camp Trek, Annapurna Base camp trek, and so on.

Trek to Manaslu Circuit in Monsoon 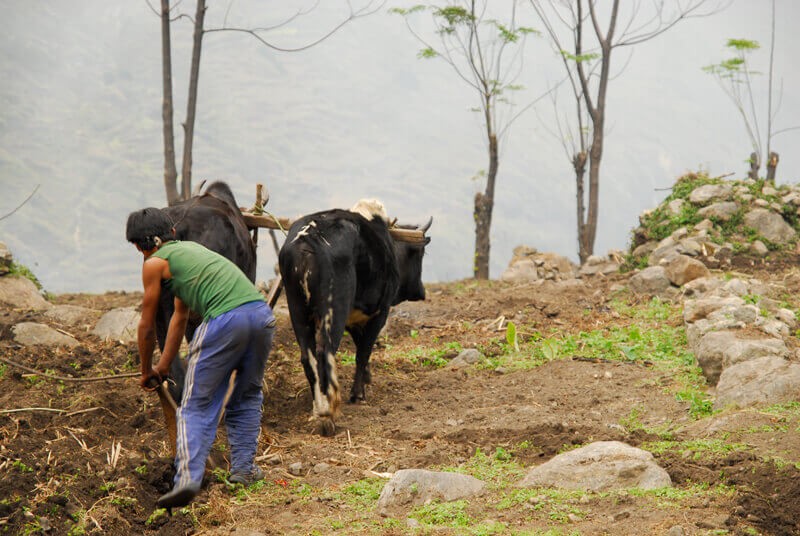 Monsoon Season means you are working and traveling with the rain and if you plan to travel during this season your trekking will be much more adventurous and have some breathtaking views and some great natural phenomenon that happens at higher altitude only during monsoon season. It is risky to travel during Monsoon Season due to rainfall the trail may be slippery and the chances of landslides and floods are high as well.

If you are a true adventurer and are ready to face some thrilling experiences on your trip, then this is the best season for you Travel Manaslu Circuit Trek. During this season the smell of nature is so good, pollution done by the travelers is way less compared to spring seasons and the trail is more isolated to you.

Very few adventurers wander around Manaslu Trek during Monsoon Season, the temperature is nice and cool at a lower altitude, and at a higher altitude, you need to be ready to face cold. The best moment doing the trek during monsoon season is you can witness the hide and seek between the mountains and clouds. The mountains in the view are just too great and magical. You will be rewarded with an amazing view after getting soaked in the rain for two to three days. [Note: carry warm clothes and a raincoat if you are planning your trip during monsoon season]

June is the start of the Monsoon season and offers the best views of nature. The weather is slightly humid, and you can experience nature wet and cool. It's the best month if you love rain, rainbows, and less crowded trails. During this month the air starts getting humid with continuous rainfall.

The weather is rather cold, and you need to be prepared to warm yourself at a higher altitude. And as it is starting the monsoon season you will find a few adventurers while trekking to the Manaslu.

June is the official start of the monsoon in Nepal. Despite monsoon, it is one of the best times to appreciate the natural beauty of the Manaslu Circuit trail. The lower valley turns a lush green and there is a high chance of glancing at impressive rainbows.

The temperatures tend to slightly decrease due to continuous rainfall but the humidity increase. However, during the early days, you’ll find a few trekkers on the trail.

You need to be clear that you will be getting the highest rates of rainfall in the month of July. The probability of rain is day by day but once it gets sunny the days are warm and smooth. As the rain washes up the little bit of dust and pollution the environment opens and is very much fresh and you will be able to enjoy nature in chilly weather. 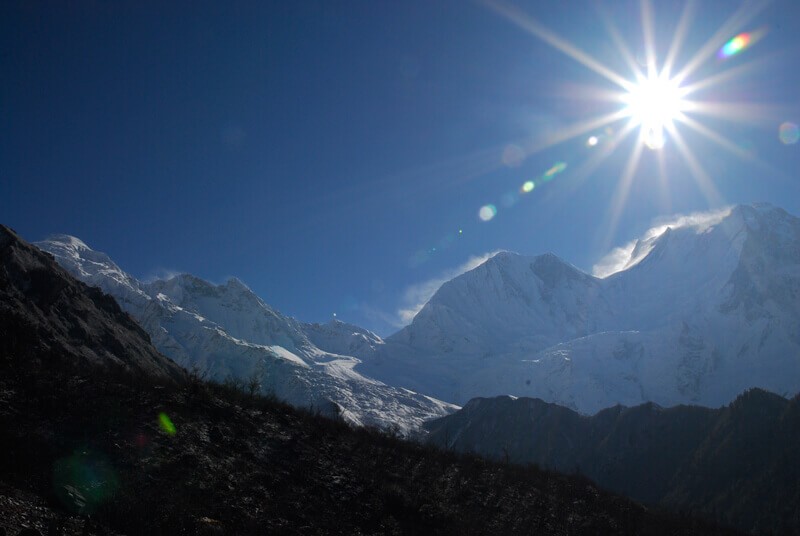 The peak season for tourism in Nepal falls within the Autumn season. The weather is the best and is very suitable to travel and plan your trip all around Nepal. Nature is a fresh, clear sky and cool warm weather makes this season best for traveling at a higher altitude as well as at lower altitude. There are very few chances of rainfall, you can travel feeling secure. The trails are dry, and it is easier to hike.

And another big merit to traveling during this season is that you will be able to explore Nepali culture, and tradition and can enjoy the main festival of Nepal with the local communities. Not that you cannot experience Nepalese culture in other seasons but during the autumn season there are lots of festivals going around. The main festival of Nepal i.e. Dashain and Tihar is celebrated during this season. Every Nepali are in a joy and is getting prepared for their preparations to celebrate festivals.

The roads are busy with locals and tourists and travelers around the globe. The trail of Manaslu Circuit trek as well as other trekking destinations of Nepal start being busy. The climate is dry and warm. You can expect no amount of rainfall during the month of October and November.

You can expect a great climate and weather as the nights are cool and the days are warm. This season is most favorable for travelers to hike and trek to the high Himalayas. All you need to do is to carry some warm clothes to be prepared to face off cold nights at higher altitudes. The trails are busy as Manaslu Circuit receives most wanderers around this season. You need to plan your trip beforehand it makes it a lot easier for you to travel. You can get well-managed lodges at trekking.

September is the month when the autumn season starts. The weather is beautiful as it is stable and you can pretty much depend on the forecast and trek to the Manaslu circuit trek at utmost security. The trails are great and are busier than

September is the starting month of the autumn season. Generally, the monsoon season at the middle of September. This month comes with stable and wonderful weather conditions. Trekking season is in full swing. Manaslu Circuit trails are busy.

October is the best month to go trekking on the Manaslu Circuit trail. The weather is perfectly comfortable, and the mountain views are awesome!!!

You’ll be surrounded by breathtaking views of the snow-capped mountain. During this time of the year, there are many trekkers on the trails so it’s a good idea to pre-book for accommodation and transportation.

November marks the end of the autumn season. The temperature starts to decrease significantly. At the high altitude in the morning and night, the temperatures drop down below the freezing point. 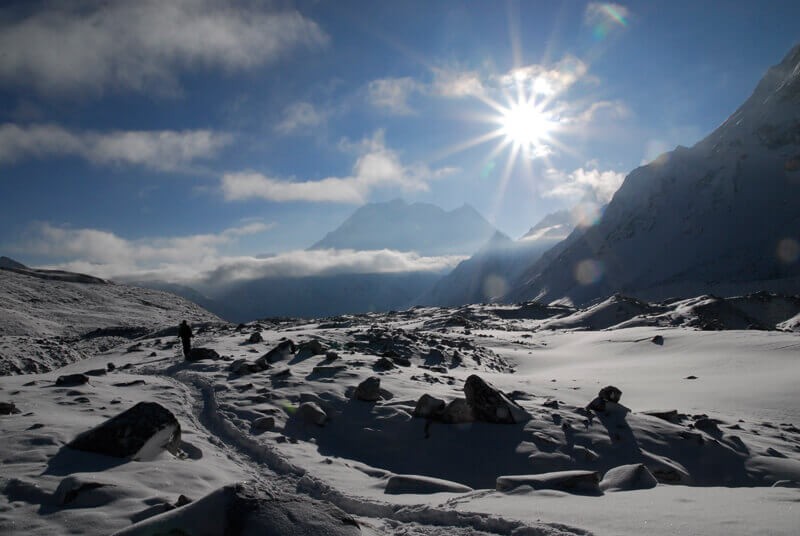 The winter brings clear skies and dry weather to the Manaslu Circuit trail. The temperatures are warm during the daytime but significantly decrease as the sun sets. Thus, the temperature is easily down to -20ºC during the nighttime and early morning.

Once again, the number of trekkers on the Manaslu Circuit trail decreased.

Usually, around mid-December the locals of Samdo village move downwards to Pokhara to escape the cold. Thus, most of the teahouses are closed only a few people remain behind to look after the village.

The temperature at the beginning of the month is very cold but the skies are mostly clear. You’ll see the trails are covered with snow so to cross the pass you might need crampons.

Since January is the coldest month of the year, you have to enough struggle to pass the extremely cold night. Thus, only a few people can make their way to Manaslu Circuit during this month. Many of the teahouses are closed so it is mandatory to bring a tent and sleeping bags.

There is no vast difference between the temperature in February and January. However, at the end of the month, a few lodges are open.

Note: Nevertheless, the above is an indication only. You may encounter other weather patterns than the season you may be traveling in. Being subject to so many influences, it will never be extremely hot, but rain, snow, and wind can never be discarded completely.

But the views are still the same you’ll be surrounded by breathtaking views of mountains and glaciers.