Natural beauty abounds in Nepal. There are no words to describe Nepal's astonishment and the beauty of the snow-capped Himalayan peak ranges. With its breathtaking natural beauty, Nepal is home to some of the most picturesque lakes where countless visitors come from around the world. With its countless lakes, Nepal is one of the most aesthetically pleasing countries on earth. Awe-inspiring lakes in Nepal are a popular attraction among travelers. This section features some wonderful lakes that will inspire you to visit Nepal.

Gokyo lake is located at an altitude of 4700 to 5000 m from sea level. The lake is the main attraction around the Everest region. It is one of the freshwater lakes which is located at high altitudes. This Gokyo lake is sometimes referred to as the Dudh Pokhari as the water in this lake is white as Milk. Gokyo lake is a group of six lakes i.e. Gokyo Cho (Dudh Pokhari), Ngozumpa Cho, Gyazumpa Cho, Thonak Cho (the largest), Tanjung Cho, and Longbanga Cho which is situated at the foothill of the Everest region. 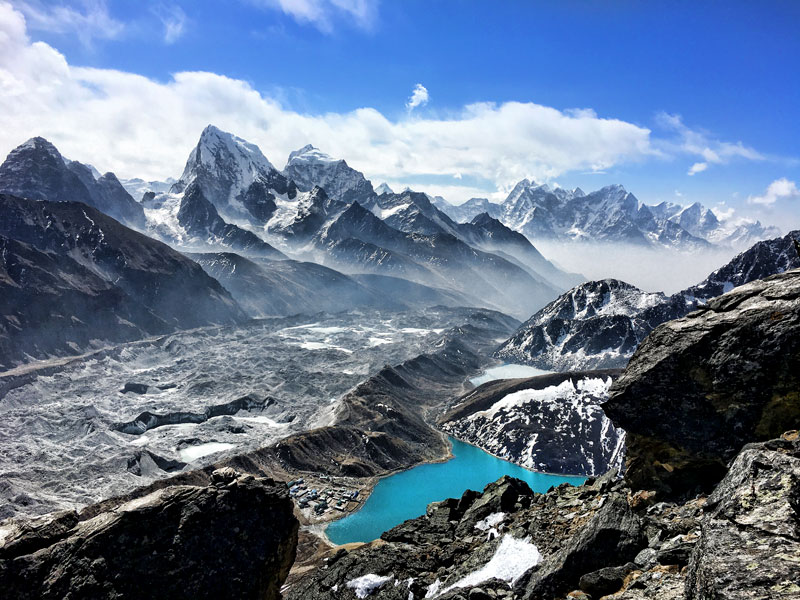 These lake’s fed from sources like streams coming from the Renjo- La pass and Ngozumoa glacier. As to Hindu mythology, this lake is considered to be the abode of the Snake God. There is a temple of two Hindu Lords I.e. Lord Vishnu and Lord Shiva situated at the western corner of the lake. If any trekkers trekking to the Everest region misses the chance to see these beautiful lakes, then their trip is incomplete.

Other than the view of beautiful lakes you can see the breathtaking view of Gokyo RI- Himal from the setting of lakes. While trekking in the Everest region if you hike through the Gokyo lake, you can experience the stunning and glorious view of six lakes and Gokyo RI -Himal.

Rara lake is a unique lake situated at an altitude of 3060m which can change seven different colors during daylight. This lake is the largest lake in Nepal. This lake is so large that you need a whole day to walk around the lake. This lake is considered an important wetland enlisted as the Ramsar site in the Rara national park. You can experience the unspoiled environment around Rara lake as the lake is not as frequent as other lakes. 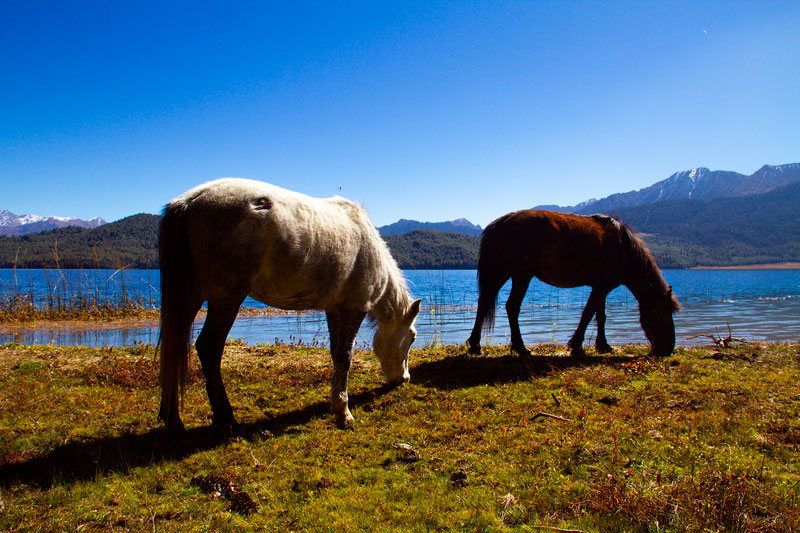 Rara Lake likewise is one of the highest lakes in the world, sitting in a valley encompassed by lush forests and stunning mountain vistas. As agriculture is the main occupation of people around Rara lake you get the sights of terrace farms and chartreuse terrains lush with the growth of vegetation while trekking through the trail to Rara. While trekking to Rara you can experience the ideal trekking around the surrounding of a pristine lake, Himalayan flora and fauna, and mountain vistas.

Gosaikunda lake is one of the most popular pilgrimages for Hindus which is in Rasuwa. The lake is situated in the midst of mountain vistas at an altitude of 4,380 m. This lake is one of the major attractions for the trekking route of the Dhunchhe – Gosainkunda – Helambu Trail. Other than Gosainkunda Lake, there is about 108 small to the medium-sized lake in the same district.

Gosaikunda has its own importance in the Hindu religion. According to Hindu mythology, it is the abode of Hindu deities i.e. Goddess Gauri and Lord Shiva. This region has been described as a religious site. As the lake is frozen for only a short time during winter, Gosaikunda is often referred to as the “Frozen Lake”. This lake is also listed as a Ramsar site and is within the Langtang region. While trekking to Langtang you can add hiking to this lake to your Schedule.

As this lake offers a glorious view of Ganesh Himal and Langtang Lirung. You can gather up some life experiences and memories if you hike to Gosainkunda lake while trekking to Langtang valley.

Phewa Lake is the second largest lake in Nepal. It is the most beautiful lake and it looks even more beautiful when it reflects the perfect image of Mt. Machhapuchhre. The Phewa lake also has religious importance as a Temple Taal- bara hi is located on the island of the Phew lake. This lake is situated to the south of Pokhara valley and is the main attraction for travelers who are traveling to Pokhara valley.

The northern shore of the lake is developed as the main attraction for tourists, commonly called Lake-side has various hotels and restaurants which provide a spectacular view of Phewa lake and the best foods. Boating is the main attraction for those who are traveling to Annapurna base camp. The Pokhara is the starting point of the trek so every trekker gets to see this famous lake and the splendid view of the mountains while trekking to the Annapurna region.

Tilicho lake is in the Annapurna range. It is elevated at an altitude of 4,949m and is the highest lake in the world. This lake also has religious importance to Hindu society as this sacred lake is featured in the holy book of Hindu “The Ramayana”. While trekking to this lake you can experience the stunning view mountain panorama including the view of Annapurna II, III, IV, Gangapurna, Manaslu, Pisang Peak, and Chulu West Peak. 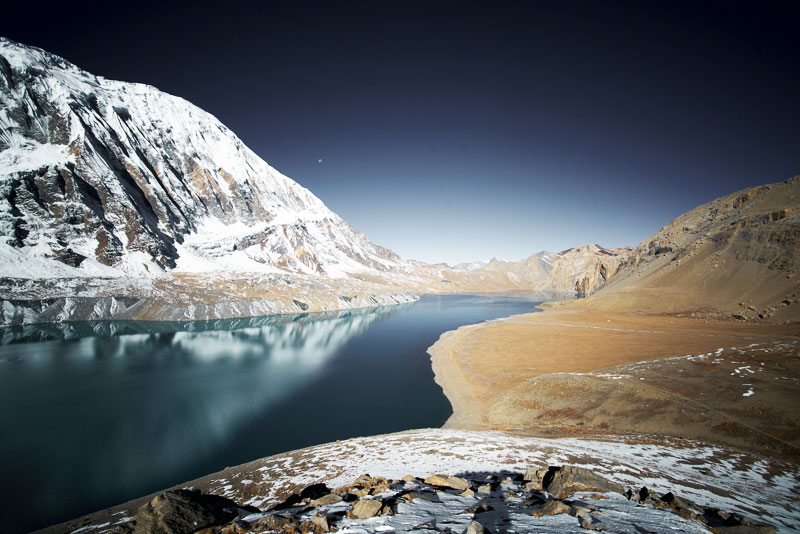 As this lake is situated in the Annapurna conservation area it can be reached by passing through the Thorong La Pass.  The beauty of the lake is further increased by surrounding peaks which include The Kangsar, Muktinath peak, Nilgiri, and Tilicho. If you are traveling to the Annapurna region then you must visit this lake, the surrounding lakes, those beautiful mountain peaks, and the fresh and cold water in the lake will give you a worthy experience with the Himalayas of Nepal. 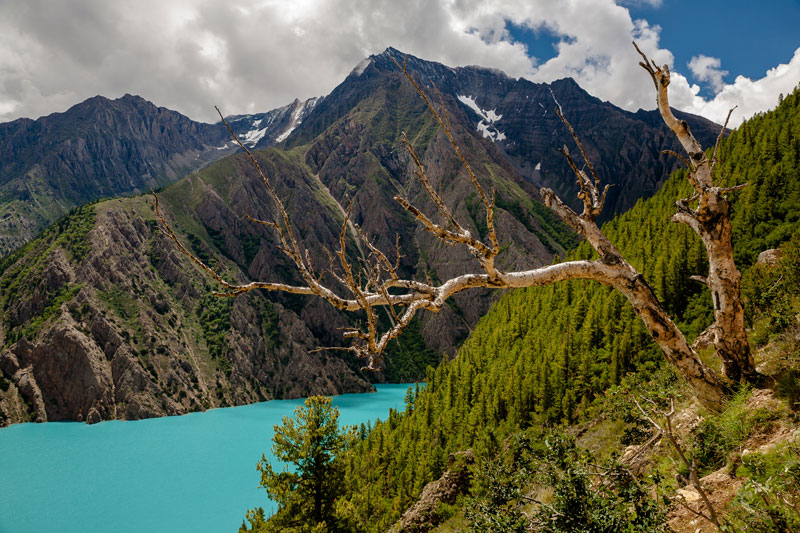 There’s a village on the southern end of the lake of Ringmo sitting on the 30,000-year-old landslide dam which formed the lake. There are stupas around the southern part of the lake. The lake is considered a sacred site due to which swimming in the lake is prohibited. While trekking to this Lake you can experience the traditional Tibetan culture, Buddhist monasteries, waterfalls, and rare Himalayan flora and fauna.

Paanch Pokhari is a group of scared and pristine glacial five lakes. This alpine lake is elevated at an altitude of 4100 meters located in the Langtang national park. It is the most beautiful lake which has the least number of visitors than any other lake in Nepal. This lake is one of the pilgrimages sites for Hindus. As you reach this lake you will be able to view the majestic views of the Himalayas and hiking to this lake offers you the natural wilderness of Sindupalchowk. 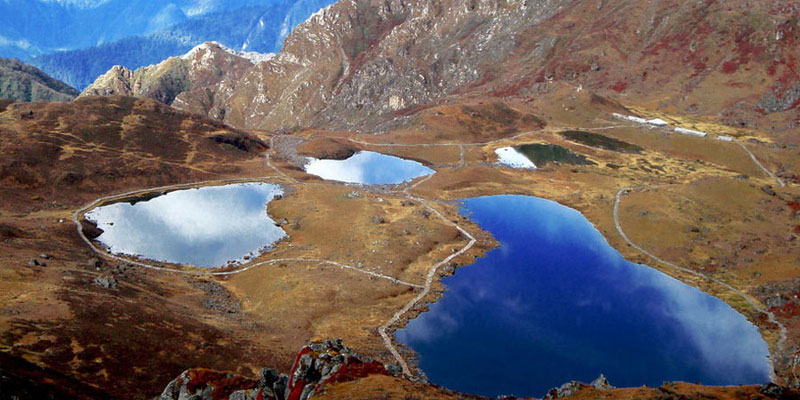 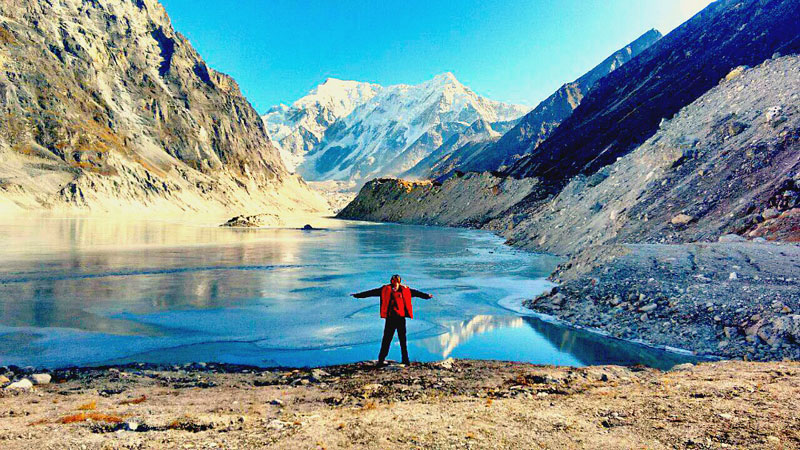 This glacial lake lies in the Rolwaling Valley of the Dolakha district. You can get perfect views of the Rolwaling range and Likhu Chuli as the Likhu Chuli rises in front of Tsho Rolpa lake. This lake is encompassed by the Gauri-Shankar Conservation Area and is considered an important wetland of the conservation area. While trekking to Tsho Rolpa you will get the chance to explore the lifestyle of the Tibetan – influenced Sherpa culture.