Trekking to the remote Himalayan region of the Upper Mustang is the most adventurous and beautiful trekking experience. The incredible landscape, ancient Tibetan culture, breathtaking sceneries, and wonderful Himalayan panoramas make this trip one of the iconic trekking destinations in Nepal.

Exceptionally less explored but a superbly wonderful region, Upper Mustang is a region that simply overwhelms travelers with its magnificent simplicity. 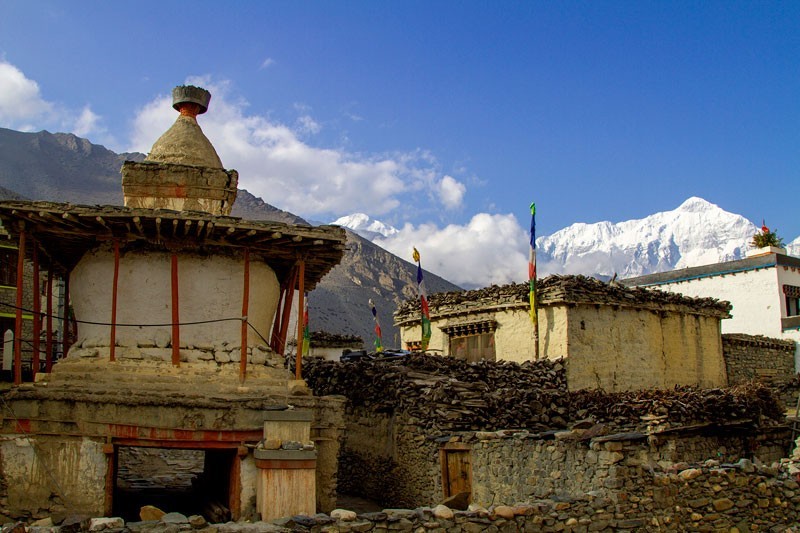 Upper Mustang Trekking was closed to foreigners until 1992. Even today access to non-Nepalis travelers is highly restricted. For entering the Upper Mustang, that is to travel further North of Kagbeni, travelers need to acquire special trekking permits. Besides the permits, a non-Nepali traveler must be accompanied by a government-appointed official.

Being Isolated from the world for centuries, trekking through this region is truly the best opportunity to explore the untouched Tibetan Culture and virgin landscape. As it was off-limit to foreign travelers, this region is also known as “The Last Forbidden Kingdom.”

Where is Mustang Located?

Mustang is one of the seventy-seven districts of Nepal. This region is the ancient Himalayan Kingdom lying in the northern central part of Nepal, above the Kali Gandaki river. More precisely, Mustang lies in Dhaulagiri and on the edge of the Tibetan plateau.

The independent Kingdom was founded in 1380 by Ame Pal. It was annexed by Nepal in the 18th century. In 1950 the former Kingdom of Lo was officially declared part of Nepal. This region spreads southward direction to Nepal. 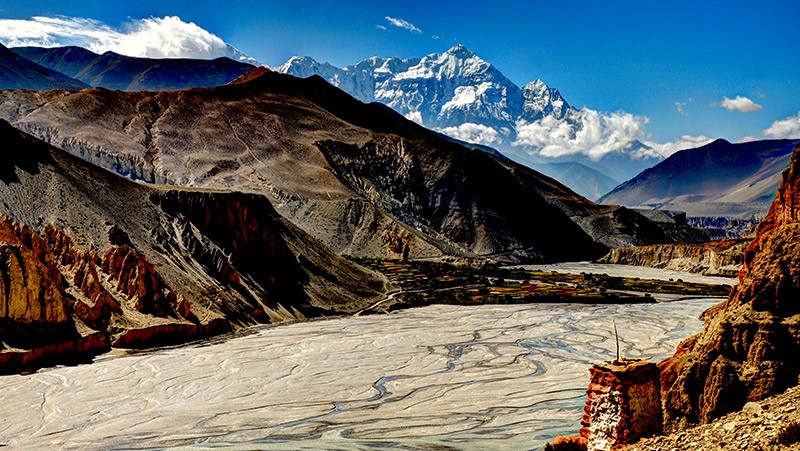 Upper Mustang lies in the Himalayan rain shadows, making it the driest region of Nepal. Even at the time of monsoon, the mustang valley is quite dry with only occasional rainfall. Being one of the driest regions, this region is accessible throughout the year for trekking.

Although this region is accessible throughout the year, the Summer season (May to Late August) is considered to be the best time to visit the most beautiful valley of the Upper Mustang. During this time of year, the weather is stable, giving you access to the incredible landscape and mountain views. Traveling for this reason at the time of May will also be an opportunity to witness an ancient three days festival, the Teiji Festival, which is celebrated in the walled city of Lo Manthang. 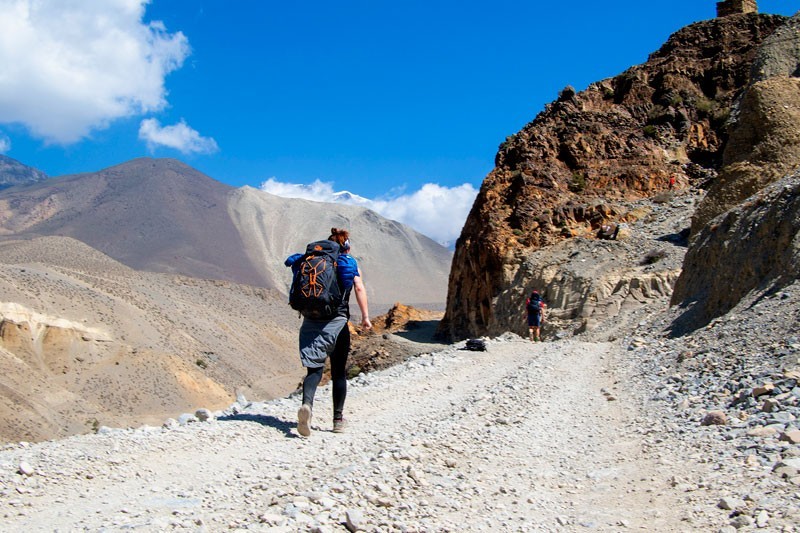 In the cold winter season, trekking is not particularly difficult. However, the weather condition at this time can be arduous, giving you a quite hard time traveling. The temperature of Lo Manthang in winter falls below – 20 ° C, Only a few people stay to take care of animals & the village. For the best traveling experience, it is better to avoid the cold winter season because of the harsh weather conditions.

Festival is the 3 days ritual known as “The Chasing of the Demon” which is based on the Myth. As per the legend, it is said that a deity named Dorje Jono battles against his demon father to save the kingdom from destruction. As per the myth, the demon father wreaked havoc on Mustang and created a water shortage in this region. 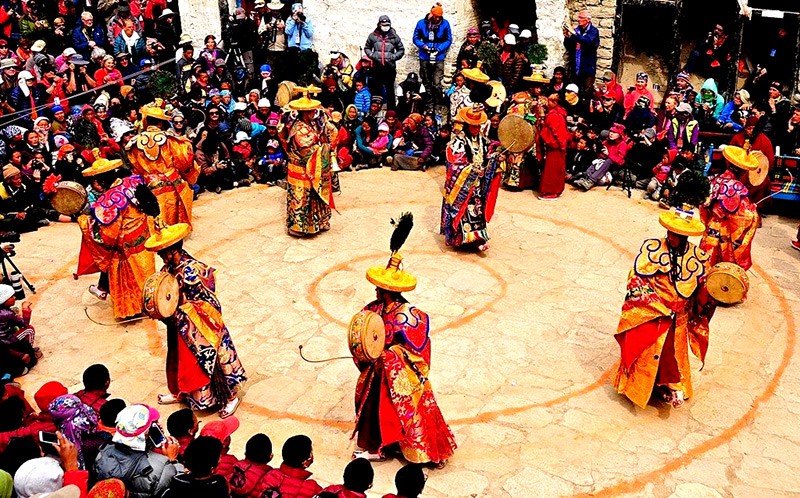 As the mustang valleys lie in the shadows of Annapurna and Dhaulagiri Massif because of which this region is dry land, and water is the most essential commodity for all people and animals residing in this region.

As the demon father created a water shortage, causing many resulting disasters from famine to animal loss. To uplift this curse and quality, Dorje Jono battled his demon father, defeated and then banished him from the land. This “Chasing of the Demons” is the Tiji festival, a celebration and reaffirmation of the myth through dances and religious ceremonies.

This “Chasing of the Demons” is the Tiji festival, a celebration and reaffirmation of the myth through dances and religious ceremonies. 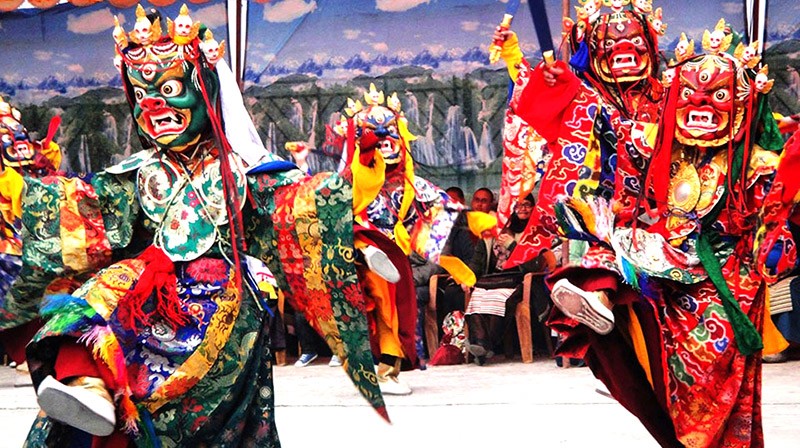 Every single trekker who visited this beautiful valley has fallen in Love with Mustang Nepal. Hiking in the land beyond the mountain will bless you with vivid natural scenery, beautiful Himalayas, and awe-inspiring natural topography.

Being isolated for so long, traveling to this part of Nepal, is once in a lifetime opportunity to experience the ancient Tibetan culture. Apart from the natural beauty and ancient civilization, Mustang is also famous for the apple farm and the famous Thakali food.

Below are some amazing facts about mustang: 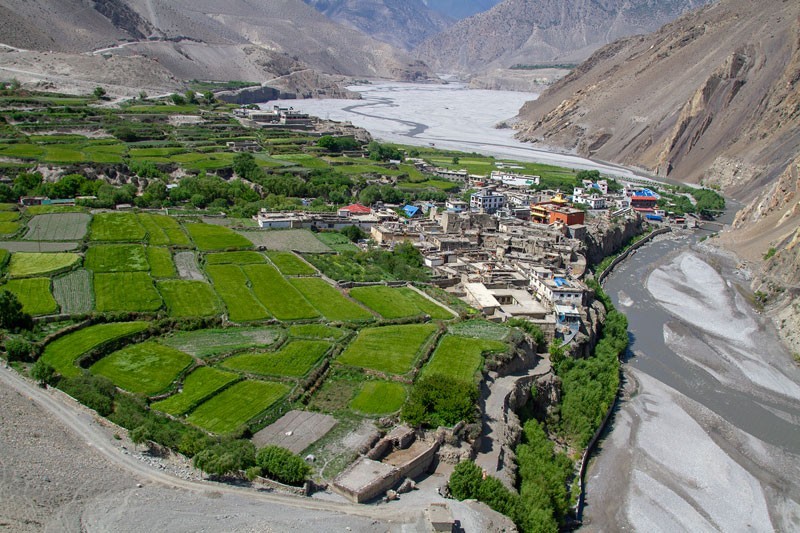 Located in the northernmost part of Nepal, Mustang is blessed with a wide range of Natural vegetation. Tropical alpine and coniferous forest occupies a small part of the Mustang. However, the mustang main attractive part of the Mustang is the apple fields and rhododendron forest. These two things have uplifted the beauty to a whole different level. The beautiful apple fields and rhododendron forest swiped the entire hillsides with pink and red.

Desert Vegetation around the Himalayas 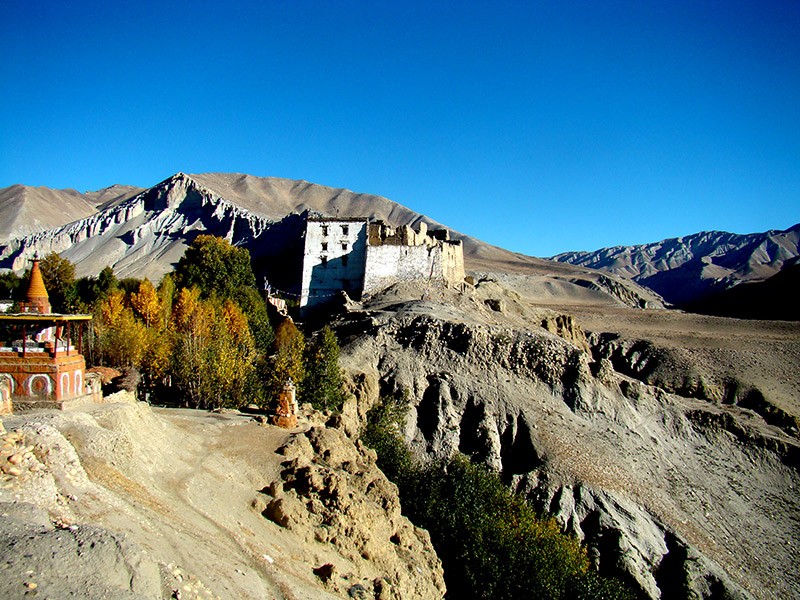 As mustang lies in the shadows of the Annapurna and Nilgiri range, the topography of this region mirrors the desert vegetation. Cold desiccating winds, a short growing season, low precipitation, and cold air temperatures limit the standing biomass produced from the steppe vegetation.

Its high altitude and its proximity to the Tibetian plateau enable the heavy wind to blow throughout the day. However, the rocky highlands make the location suitable for rock climbing. 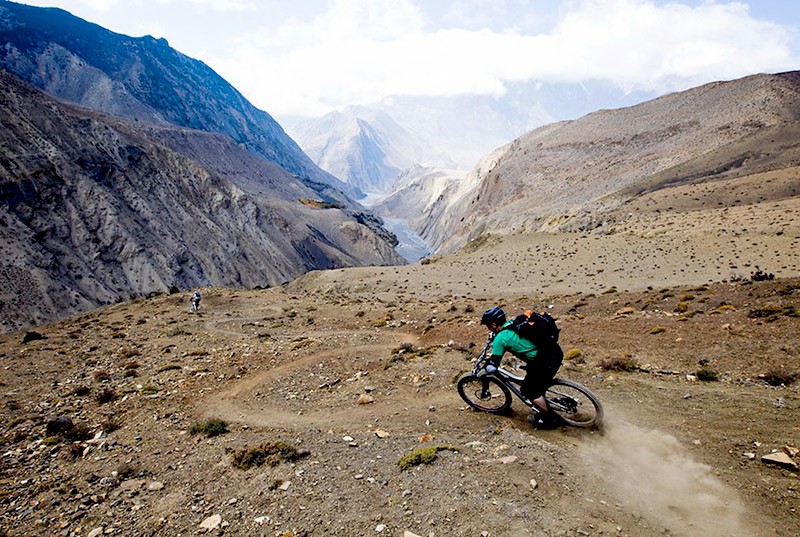 With the mix of valleys and terrains, the mustang is the best place for adventurous sports. Various sports like cycling, rock climbing, trekking, horse racing, and riding can be done in the hidden valleys of Mustang. Because of its geographical structure, Mustang consists of high lands, low lands, and plains making it the best suitable place for mountain cycling and horse riding. 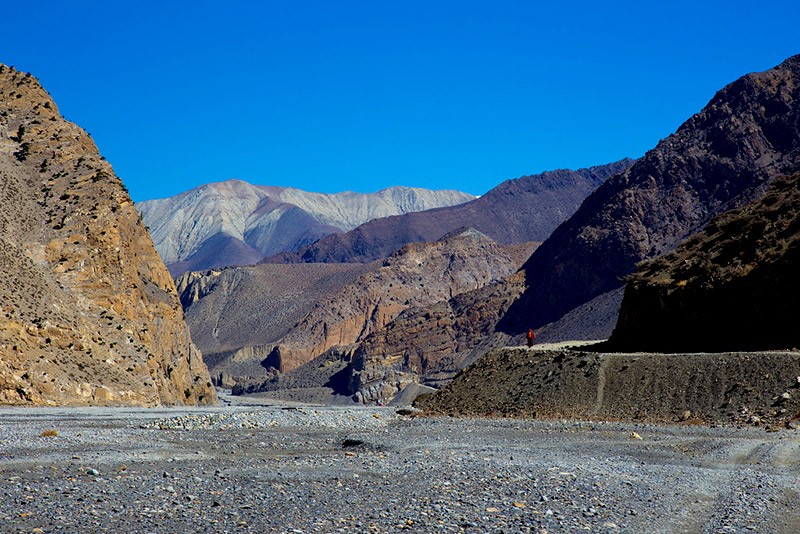 The strong currents of the Kali Gandaki River that originate from Mustang carved the Dana Gorge, which is the deepest gorge in the world. The river drains the rocky soil and highlands of Mustang and flows towards the south of the country. This gorge is another major attraction in Nepal. 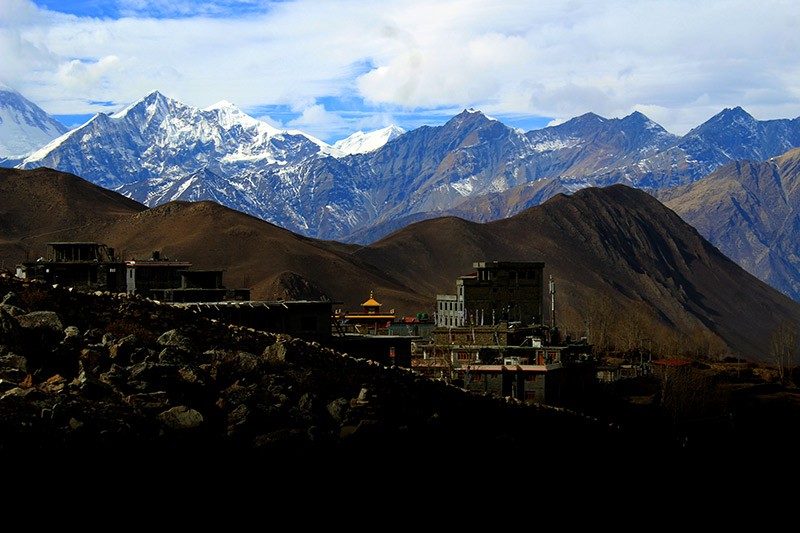 Apart from the tranquil sceneries and ancient culture, Mustang has several picturesque valleys such as Jomsom, Kagbeni, and Lo Manthang.

Permits, cost, and how to acquire them

For experiencing the Tiji Festival permits are quite expensive. The Restricted Area trek permit of the Upper Mustang will cost you 500 USD. You also require the Annapurna Conservation Area permit which will cost 20 USD.